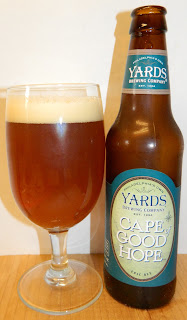 Commercial Description:
Originally brewed to withstand the epic voyages from the shores of England around the African Cape of Good Hope to the Indian Subcontient, the India Pale Ale has always been a beer for the adventurous soul. Thoroughly hopped with Amarillos in both the whirlpool and the fermenter, it was then transferred to our makeshift shipping cask, where it was dry-hopped again with Nugget and Columbus. Set adrift in our brewery without cooling, it was able to age as though it had been put to sea for six months. The result is an authentic double dry hopped and uniquely aged India Pale Ale reminiscent of something you’d find solace in on a balmy, Indian evening far away from home. Beware of tigers.
(RateBeer.com)

Background:
I’m trying to catch up on some late summer and fall beers that I have had in my beer cabinet to review but never seemed to have the time. This one was given to me be by my friend Gene. I am a big fan of Yards but I have not had this before so I’m really looking forward to see what it’s like.

Review:
The beer pours a clear copper with orange hues and a modest off white head.

The nose is nice with pale and caramel malt aromas with pleasant hop aromas and a touch of sweetness.

What a nice first sip; smooth but rich with a modest hop profile that is not overpowering. I’m going to enjoy this one.

The experience starts out with touch of sweetness up front but that only last for a split second. It is replaced by a tingling effervescence on the tongue. As this ale is rolling over the tongue the hop presence is felt. There is also a perceived robustness of a big beer that creates a hesitation at the top of the swallow. That hesitation is easily overcome with a carbonation release during the swallow that masks some flavors and adds an almost refreshing aspect to the experience. The finish is pretty intense; the robustness masked on the swallow really hits you on the finish. There is a lot going on in this little beer. The finish has great caramel malt flavors with a wonderful hop complexity that is balanced and not overpowering. The final aftertaste is carrying that balance of caramel malt and a lingering hop bite. There is also a nice warming effect from the alcohol.

Although the head seemed modest on the pour it is leaving some impressive lacing on the glass.

I’m not sure why but this 8% ale is going down fast. There must be more of a refreshing aspect of this beer than what I previously noted.

The malt flavors and the hop complexity on this beer are very intriguing.

The malt flavors remind me more of a Scotch Ale, Wee Heavy than a typical American Double IPA. The caramel flavors seem as if a portion of the wort was actually caramelized not just using caramelized malted grain. Just some nice flavors.

Also the hops are very unique and pleasant. I’m not a hop head and I’m still struggling to identify hop verities in the beers that I drink. These hops are across the board from floral to earthy to a touch of citrus and pine. For a non hophead this is very impressive.

This is a solid A for me; very impressive ale from Yards.

A | Yards Cape of Good Hope is a very impressive American Double IPA with it’s unique almost Scottish caramel malt flavors followed by an equally unique hop complexity on the finish ending in a soothing warming of the sweet alcohol. One nice little beer!