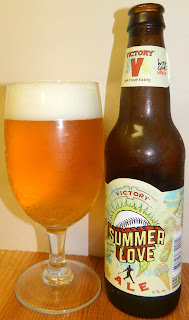 Commercial Description:
Brewed locally at the Victory Brewery in Chester County, the Summer of Love Ale is a golden ale made with pale malts, German hops and Brandywine River water. This specific style of beer was chosen because it has a broad appeal and will be accessible for casual beer drinkers, but will still retain exciting hop notes.

The brew has a vibrant and refreshing pale color derived from its lean and refreshing malt body. And the initially floral aroma of hops segues into a well integrated, refreshing hop dryness of European heritage.
(RateBeer.com)

Background:
I bought a 6 pack of this a few weeks ago to have at a family picnic. I did have one at the time and thought it was pretty good. I somehow managed to save one to review.

The taste starts out with a touch of pale malt sweetness up front on the tip of the tongue. That only last for a split second and is replaced with a tingling effervescence and hop bite as the ale washes over the tongue in the middle of the sip. There is a hop robustness that guilds though the middle of the sip into the back-end. The back-end is fairly easy drinking with an almost effortless swallow. There is an additional carbonation release during the swallow that cuts the hop robustness and adds a refreshing quality to the taste. The finish is nice with very light pale malt flavors and a very robust floral hop bite. There are also some citrus notes that try to peek through the hops. The final aftertaste is all hops.

This ale has all the bite of an American IPA but the light pale malts are quite refreshing.

However I think that this would be more refreshing if it was a little less bitter.

The head has diminished to a nice protective layer over the top of the beer and the lacing is quit impressive.

For me the hops seem to be a little overpowering. The light pale malt flavors are getting lost in the bitterness. There is really no balance at all to this ale.

This is not a bad beer. If fact most hopheads will love it. I just think it would be more enjoyable and refreshing with less hops. There are nice subtle citrus notes that are getting lost in the bitterness along with the mild pale malt flavors.

Sorry I’m afraid that this beer is a little one side and not very balanced for me.

B- | Victory Summer Love is a very light pale ale with an aggressive hop bite. Actually the hops really do overtake the pale malts and diminish the refreshing aspects of the ale. However most Hopheads will love it.
Posted by John at 8/31/2012 01:18:00 AM