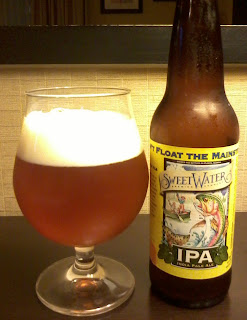 Commercial Description:
This mammoth IPA is defined by generous quantities of premium hops and balanced with a premium selection of English malt. Traditionally unfiltered IPA’s lead to the slight haze appearance. An extensive dry-hopping process contributes to its very intense floral hop aroma. The IPA is unfiltered and as always, unpasteurized to leave all the natural flavors intact. If you’re at the brewery you’ll be able to guess what style of beer every brewer has in his hand. THE BEER YOU'VE BEEN TRAINING FOR!
(RateBeer.com)

Background:
On a business trip in Atlanta and figured I would check out some local brews. These are my first hotel room beer reviews. Sorry about the cell phone pics I forgot to bring a real camera.

Review:
The beer pours a clear light copper with orange hues and a fairly rich off white head.

The hop complexity on the nose is very impressive. There are also sweet pale malt aromas and citrus notes.

Nice first sip for an IPA. Sorry that didn’t sound too good. IPA’s are not my fav but this first sip was pretty darn good.

The second sip was even better.

The experience starts out with a touch of malt sweetness up front on the tip of the tongue but that only last for a split second and is immediately replaced by tingling bite and effervescence over the tongue throughout the middle of the sip. There is also a hop robustness that builds toward the back-end. The back-end is fairly easy drinking with a modest hesitation on the top of the swallow. The hop robustness diminishes during the swallow as it is masked by an additional carbonation release. The finish is very nice with solid pale malt flavors and a great hop complexity. The hops flavors run the gambit with citrus, pine, grapefruit, earthy and floral. That is all still riding on a nice bed of pale malts. The final aftertaste is a lingering hop bite.

The really impressive thing is that with this robust hop complexity it’s not overly bitter. It really does have some balance to it.

A+ | SweetWater IPA is an excellent IPA with incredible hop complexity still riding on a nice bed of pale malt sweetness.
Posted by John at 7/28/2012 08:19:00 PM