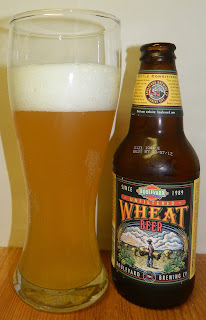 
Commercial Description:
Boulevard Unfiltered Wheat Beer is a lively, refreshing ale with a naturally citrusy flavor and distinctive cloudy appearance. It is reminiscent of the wheat beers that were brewed at the turn of the century, before the advent of modern filtration. This easy-drinking American-style wheat beer has become our most popular offering, and the best-selling craft beer in the Midwest. 2008 GABF gold medal winner in Session Beer category. (RateBeer.com)

Background:
This is another gift from my friend Gene. Gene has been spot on with his last recommendations so I can’t wait to see what this one is like.

Review:
The beer pours a hazy yellow straw with a bright white head.

The nose is modest with light wheat malt aromas along with some grassy notes.

Wow what a clean and refreshing first sip.

The taste starts out with a light malt sweetness up front followed by a very refreshing effervescence as this refreshing ale washes over the tongue in the middle of the sip. The back-end could not be easier drinking with an effortless swallow. The finish is modest but all so refreshing with pale wheat malt flavors and just a touch of citrus. There is very little of a final aftertaste just a hint of wheat malt and citrus.

This is going to be a short review. This is so easy drinking and refreshing it’s almost gone.

Well, I obviously did more drinking than writing on this one. This refreshing ale is gone already.

B+ | Boulevard Unfiltered Wheat is a very refreshing pale wheat ale that is smooth and easy drinking with a touch of citrus and spice.
Posted by John at 7/28/2012 02:02:00 PM