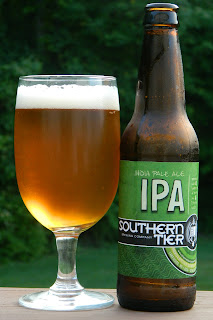 Commercial Description:
IPA stands for India Pale Ale and ours is an American version of the classic style. IPA’s namesake lies in its colonial roots. British soldiers on their way to India dark a lot of beer, but found it would go stale on the long voyages. Meanwhile, brewers knew that by adding more hops, the beer would stay fresh. Voila! A new style was born and it is one we are proud to brew. Southern Tier IPA is a triple-hopped on its journey to your glass for a fully aromatic experience.
(RateBeer.com)

Background:
This was gift from my friend Gonzalo. I have never had this IPA so I can’t wait to see what it’s like.

Review:
The beer pours a light copper with orange hues and a white head.

The nose is modest for and IPA with light pale malt aromas along with citrus and floral hops aromas.

Gee, could I be turning into a hop head? That was another great first sip.

The taste starts out with a touch of pale malt sweetness followed by an almost cleansing middle of the sip but with some hop robustness building toward the back-end. The back-end is somewhat easy drinking with only a slight hesitation on the top of the swallow. The finish is clean crisp and refreshing with pale malt flavors and a nice complexity of floral, pine and citrus hop flavors. The final aftertaste is just a hint of that lingering hop bite.

All and all this is another great American IPA that is done well without being overdone.

There is also a nice malt balance to this ale. I think I’m picking up a touch a caramel malt sweetness in the finish.

The head has diminished to a very thin almost patchy layer over the top of the beer and it is leaving some very decent lacing.

This is another B+ to A IPA. It is also a warm afternoon so maybe and IPA is just what the doctor ordered.

A | Southern Tier IPA is an excellent American IPA with just enough bite to be clean and refreshing without being overly bitter, balanced nicely with pale malt flavors with a touch of caramel.