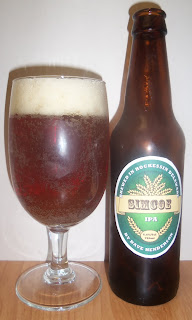 
Style Description:
The American IPA is a different soul from the reincarnated IPA style. More flavorful than the withering English IPA, color can range from very pale golden to reddish amber. Hops are typically American with a big herbal and / or citric character, bitterness is high as well. Moderate to medium bodied with a balancing malt backbone.
(BeerAdvocate.com)

Review:
The beer pours a clear caramel copper with ruby hues and a fairly rich off white head.

The nose is great with rich floral hop aromas along with nice caramel malts.

What a great first sip; nice malt flavors with a great hop finish that is not overpowering.

The experience starts out with malt sweetness up front on the tip of the tongue. That is immediately followed by effervescence over the tongue in the middle of the sip. There is a hop robustness that builds during the middle of the sip towards the back end. The back-end is fairly easy drinking with an almost effortless swallow. The hop robustness really comes together in the finish. There is also a nice malt backbone to this ale. The hop flavors are very nice with floral and citrus notes. There is a good bite on the finish but it’s not bitter and not overpowering. The final aftertaste is of slight lingering hop flavors along with a touch of malts.

All and all this is a great IPA. I’m not a hophead and this is right up my ally.

There is an impressive variance of hop flavors all coming from this single hop ale. If I didn’t know up front I would have guessed that multiple hop verities would have been used.

The head on this beer has not quite and the lacing has been impressive.

Well, I’ve been doing more drinking that writing and this refreshing little homebrew is gone.

A- | Dave’s Simcoe IPA is a great IPA accentuating all the great hop flavors from this single hop brew with a nice malt backbone this IPA is also nicely balanced and sure to please.
Posted by John at 5/22/2012 09:21:00 PM