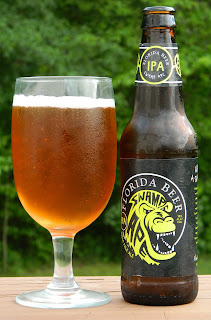 Commercial  Description:
Firsthand accounts describe an intense beast with a potent aroma and bite. Proof that the elusive monster exists? Or proof that brewing with five distinct varieties of hops creates an unbelievable, relentlessly hopped India Pale Ale? One taste and you’ll know, Swamp Ape is for real.
(RateBeer.com)

General Pricing:
12oz bottle, ~$10.00 6 pack
Background:
This is actually review 372. However I have not yet posted 364 to 371. I have them in draft form and hope to catch up this week. I have been so busy planning the last Craft Beer Event I never had a chance to post them. This week we are vacationing/house sitting/babysitting and I plan to take advantage of the situation. I will be doing some back deck reviews from our host (Gonzalo and Cecilia) deck and posting everything that I’m backed up on.  So here is review 372. Then the next few will be catch-up’s followed by more deck reviews.

Review:
The beer pours a clear copper with orange hues and a white to off-white head. It is also highly carbonated with lots of tiny bubbles rising from the bottom of the glass.

Then nose is very nice with pale to caramel malt aromas and uniquely complex hop aromas. There is also a fundamental sweetness on the nose, I’m not sure if that’s from the alcohol or not.

Wow, what a great first sip; sweet with an almost creamy mouthfeel followed by balanced but robust hop finish and warming alcohol.

The experience starts out with a touch of malt sweetness up front on the tip of the tongue. That is immediately followed by hop robustness and tingling over the tongue in the middle of the sip. Also in mid-sip there is an almost creaminess; I suspect from that head that has not quite. The back-end is fairly easy drinking for such a big beer. There is a sizable hesitation at the top of the swallow but it is easily overcome. There is a carbonation release during the swallow that mask some of the robustness and flavors. The finish pulls it all together with an exquisite hop complexity balanced with rich caramel malt flavors followed by the most comforting alcohol warming. There are also some notes of citrus and a honey sweetness. I assume that the sweetness is mostly from the alcohol. The hop robustness is never overpowering or bitter. Balanced with the malts it leaves a nice bite on the finish. The final aftertaste is a little of all of this, sweetness and floral hops.

What a great experience. This is one fantastic Imperial/Double IPA.

As rich as this is there is also a refreshing quality to it.

As this beer warms an opens up the malt flavors and alcohol seem to be more pronounced and the hop robustness seems to have diminished. Or maybe I’m just getting use to the hops.

At any rate this experience is getting better and better as it warms.

I have been commenting about the alcohol but it is not a prevalent as I’m making it out to be. If it was not posted on the label I never would have guessed that this was 10% ABV, I would have figured somewhere around 8%.

I’m down to the bottom of the glass now and the head has finally diminished to a nice ring around the edge of the glass and it has left incredible lacing.

This is an A for sure maybe even an A+. What a great IPA.

A | Swamp Ape by Florida Beer is a fantastic Imperial/Double IPA with a pale to caramel malt sweetness up front followed by a robust but not bitter hop complexity that leads into a delightfully balanced finish concluding in comforting alcohol warming. This is a big beer for sure but it maintains a refreshing aspect throughout the experience.