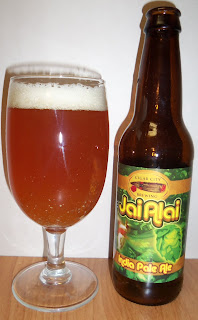 Commercial Description:
Jai Alai, a game native to the Basque region of Spain, is played on a court called a fronton. Jai Alai players attempt to catch a ball using a curved mitt whilst the ball travels at speeds up to 188mph! Proving they have a sense of humor the Spanish dubbed this game, with its ball traveling at racecar speeds, “the merry game.” Tampa was once home to a bustling Jai Alai fronton but sadly all that remains of Jai Alai in the Tampa Bay area is this India Pale Ale that we brew in tribute to the merry game. The India Pale Ale style of beer has its roots in the ales sent from England to thirsty British troops in India during the 18th century. Pair Jai Alai India Pale Ale with Beef Empanadas, Deviled Crabs and other spicy dishes.
(RateBeer.com.com)

Background:
My friend Gonzalo was in Florida visiting relatives over the Christmas Holidays and brought me back a few local beers. It’s taken me a while to get to them. At this point I am just about done.

Review:
The beer pours a golden copper with orange hues and a white to off white head.

The nose is nice with sweet pale malt aromas along with an interesting complex floral and citrus hop aromas.

That was an interesting first sip; very hoppy but not very bitter.

The experience starts out with a touch of pale malt sweetness up front on the tip of the tongue. That is immediately followed by a tingling effervescence over the tongue. There is a building hop robustness that builds towards the back-end. There is a sizable hesitation at the top of the swallow. The finish is pretty intense with some pale malt flavors but mostly all hops. The hops are complex with citrus, pine and grapefruit notes. The final aftertaste is also all hops.

Well for an American IPA this is about as good as it gets. Although for me this is pretty one sided having no malt balance.

As I continue to drink this beer it seems to be getting better or I’m just getting use to the hops. At any rate I am enjoying this more now that it’s warmed and opened up a little.

I’m picking up more malt flavors and noticing the complexity of the hops. At first it was just in your face hops on the finish. It has mellowed some with temperature.

I guess I have to go for a higher grade than what I enjoyed it at. This is part of my dilemma when reviewing a beer that is good in style but not quite the style that I enjoy.

B+ | Cigar City is a very good American IPA that any hop head will certainly enjoy with it’s over abundance and complex hop bitterness on the finish. This one is pretty much all hops so don’t expect balanced ale.