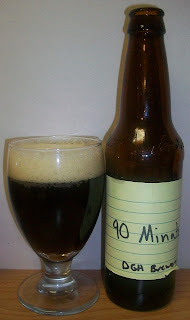 90 Minute IPA
(Clone Home Brew)
Brewed by:
DGH Brewery
Hockessin, Delaware, USA
American Double / Imperial IPA
9.00% ABV (Commercial)
Style Description:
Take an India Pale Ale and feed it steroids, ergo the term Double IPA. Although open to the same interpretation as its sister styles, you should expect something robust, malty, alcoholic and with a hop profile that might rip your tongue out. The Imperial usage comes from Russian Imperial stout, a style of strong stout originally brewed in England for the Russian Imperial Court of the late 1700s; though Double IPA is often the preferred name.
You can thank west coast American brewers for this somewhat reactionary style. "Thanks!"
Average alcohol by volume (abv) range: 7.0-14.0%
(BeerAdvocate.com)
Background:
We are continuing Homebrew Week. This is a clone that I will try to review head to head with the commercial version. At least I’ll start off tasting them both side by side and then do separate reviews.
Review:
The beer pours a hazy chestnut brown with a rich tan head.
The nose is very nice with rich caramel malt aromas with an underlining sweetness. With a gentle swirl of the glass a rich hop complexity is release with aromas of citrus and pine.
Wow, what a great first sip. Rich caramel malt flavors smooth mouthfeel and nice hop finish.
I have to say right up front this is a completely different beer than the commercial version. The malt flavors in this beer are much richer than the commercial. For me this is a superior brew over what you can get in the store.
I’ll add a few comparative notes and then review each one of these on there own. 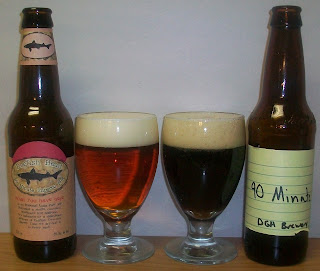 OK from here on its stand along reviews
The taste starts out with a dark malt sweetness up front followed by a very pleasant almost creamy smooth mouthfeel as the ale rolls over the tongue in the middle of the sip. The back-end is fairly easy drinking for such a big beer. There is typical but easily overcome hesitation at the top of the swallow. The finish is fantastic with rich caramel malts with dark fruit notes and a very pleasant hop complexity that is not overpowering. The hop flavors are citrus, floral and pine but blend with the rich malts to provide a nicely balanced experience. There is also a nice warming and alcohol sweetness on the finish. The final aftertaste is a combination of lingering hops and malts.
What a great experience. I am really enjoying this clone.
This is the perfect big beer for me rich in a hop complexity but equally balanced with rich caramel malt flavors.
I let this warm to room temperature and it is just fantastic.
I can’t tell you how much I’m enjoying this beer. The rich caramel malts have a wonderful dark fruit note to them.
This is an A+ for sure; what a great experience.
A+ | Dave’s 90 Minute IPA clone is a fantastic beer and superior to the commercial version with it’s great rich malt flavors and hop complexity that is never overpowering leading into a well balanced finish and warm alcohol sweetness.
Posted by John at 3/21/2012 12:58:00 AM