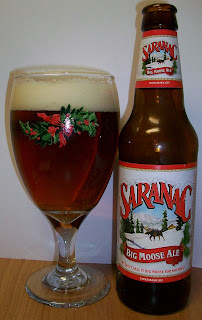 
Commercial Description:
Saranac Big Moose Ale is an American Pale Ale with a kick. The medium-bodied malt sweetness is balanced by a nice crisp bitterness from hand selected centennial and cascade hops. Look for a vibrant citrusy hop aroma that will leave you craving another swig!
(RateBeer.com.com)
General Pricing:
12 oz bottles: ~$7.00 6 pack, ~$27.00 case
Background:
This beer was in this years Christmas Beer Variety case at State Line Liquors. I have never had it before and I’m usually pleased with Saranac’s beers. They are not over the top but all usually easy drinking and enjoyable.
Review:
The beer pours deep dark copper almost brown with orange hues and an off white head.
The nose is very pleasant and inviting with nice pale malt aromas and light floral hops.

That was an interesting first sip. This Saranac has some character to it.
It starts off with light malt sweetness up font but that is instantly replaced with a tingling effervescence as the beer rolls over the tongue. There is a hop robustness and bitterness that builds into the back-end. There is a hesitation at the top of the swallow but that is very easily overcome. There is a carbonation release during the swallow that seems to have a cleansing effect or at least diminishes the hop robustness. The finish is unexpectedly intense with some pale malt flavors along with a very robust hop complexity. It is mostly these hop flavors that carry into the final aftertaste.
All and all this is a very nice beer and somewhat refreshing. Although it is totally different form what the nose indicated.
The head on the beer has not quite. It has reduced to a thin protective layer over the top of the beer and lager ring around the glass. It is also leaving some very decent lacing.
The beer seems to be smoothing a little as it warms or that may just be my getting use to the hops.
At any rate the more I drink this the more I like it.
I am really impressed with this beer; this may be the most artfully crated beer that I’ve had from Saranac.
My only down note is the hop robustness. It almost seems like it’s more hops than the style should have. But then again I’m no hophead.
I’m going for a B+ on this. Big Moose is an artfully crafted American Pale Ale with pale malt flavors and a hop complexity that does not let you down. Even the head on this beer stuck around until the very last sip.
Posted by John at 2/13/2012 11:51:00 PM