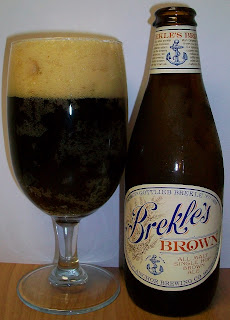 Brekle's Brown
Brewed by:
Anchor Brewing Company
San Francisco, California
American Brown Ale
6% ABV
Commercial Description:
Brewmaster Mark Carpenter’s unique recipe for Brekle’s Brown—a tip of the hat to our first brewmaster—looks to both the past and the future. Mark’s special blend of roasted malts, inspired by the all-malt brown ales in Anchor’s brewing archives, gives Brekle’s Brown its coppery brown color and its unusual depth of flavor—richness and complexity without heaviness. For brewing and dry hopping, Mark has chosen a single, American hop variety called Citra. The subtly entrancing flavors and aromas of this distinctive new hop perfectly complement the unique maltiness of Brekle’s Brown.
(RateBeer.com.com)
General Pricing:
12oz bottle, ~$10.00 6 pack
Background:
The gang at work contracted State Line Liquors to put together a basket of cheer for me when I was home with a nasty case of the Shingles. Robert Murray at SLL did a great job in personally selecting beers for me. The next several reviews will be from this gift basket.
Review:
The beer pours a clear dark brown with just a hint of ruby hues peeping through the glass and a plentiful off white head.
The nose is delightful with rich caramel malt aromas and a hint of floral hops.

What a nice first sip.
The taste starts out with a touch of sweetness up front on the tip of the tongue followed by a tingling effervescence as the beer washes over the tongue in the middle of the sip. The back-end is fairly easy drinking with just a slight hesitation at the top of the swallow. The finish is very nice with caramel malt flavors and a noticeable hop presence. The final aftertaste is some lingering caramel malt and hops.
The hop flavor is very pleasant in this beer and not overpowering or bitter.
This is a very enjoyable and fairly easy drinking beer.
As the beer warms it just gets better. The malt flavors are more enhanced now and the overall mouthfeel seems to be smoother.
There is an interesting complexity to this beer that must be coming from the malts since this is a one hop beer.
This is a nice brown; I’m going for a B+.
Anchor Brekle’s Brown Ale is a very good easy drinking simple American Brown ale with subtle complexity of rich caramel malts and delightfully crisp floral Citra hops on the finish.
Posted by John at 2/23/2012 08:59:00 PM