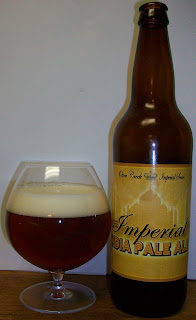 Commercial Description:
Malts: 2-row Munich, Carapils, Caramel 60L, Caramel 20L, Wheat. Hops: Bravo, Apollo, Amarillo, Simcoe.
(RateBeer.com)
General Pricing:
22 oz bottle: ~$7.00 each
Background:
It’s a cold snowy night in October, yes I said snowy. We are in a middle of an unusual fall snow storm. I was looking around the house for something to take the chill off and I remembered that I was cellaring one of these since 2009. I reviewed this beer back in the fall of 2009. At the time I thought that the beer was too intense with hops and alcohol and that it was lacking any malt balance. I also thought that it would be interesting to see how it aged; would the hops mellow? Would the malts create more balance as they age? So let’s see what happens to an intense imperial IPA after cellaring for two years.
Review:
The beer pours a slightly hazy amber with deep ruby hues and a very rich and lasting off white head. As a side note I do have to mention that there is a lot of sediment in the bottom of the bottle. The fresh version does not have sediment.
The nose has very pleasant caramel malt aromas on the nose along with sweet alcohol and a mild hop presence. The hop aromas are subtle but complex with mostly floral and earthy notes.
I can’t to see how this tastes.

Wow, what a great first sip; rich and warming. This is a perfect beer for a cold snowy night, even if it is only October.
The experience starts out with malt sweetness up front on the tip of the tongue. That is immediately followed by a hop robustness the builds throughout the middle of the sip. The back-end is pretty intense with a large hesitation on the top of the swallow.
The warming effect almost hits you before the finish. The finish is also intense with rich caramel malt flavors, a robust hop complexity and sweet alcohol. There is a lingering robust hop aftertaste. The hop experience is very rich and intense but the bitterness has mellowed.
This is a very smooth big beer whose hop intensity has mellowed with age.
I’m really enjoying this big beer.
I let the second glass warm to room temperature.
The beer did not pick up any new flavors or character as it warmed.
It’s interesting how the character of the beer changed but this beer did not develop any as it warmed. I guess I was expecting more complexity now after two years in the cellar.
I’m going for a B maybe a B+ for the aged Imperial IPA. This beer did get better over time. Aging this beer mellowed the intense hop flavors and brought out a richer malt character.
Posted by John at 10/31/2011 02:34:00 AM