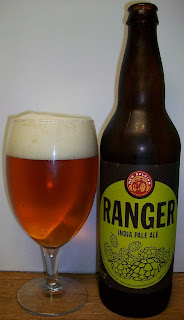 Ranger IPA
Brewed by:
New Belgium Brewing
Fort Collins, Colorado USA
American IPA
6.50% ABV
Commercial Description:
Are you a hopinista? Thank our Beer Rangers for inspiring (and begging for) this well-balanced Simcoe, Cascade and Chinook hopped IPA. 70 IBUs
(NewBelgium.com )
General Pricing:
22 oz bottles: ~$3.50 each
Background:
New Belgium finally arrived in our area on Monday. I stopped in at State Line Liquors after work on Friday for the Hurricane Happy Hour and New Belgium beer tasting. I bought a variety of New Belgium beers that night to help ride out Hurricane Irene and then some. So the next series of reviews will be from New Belgium. 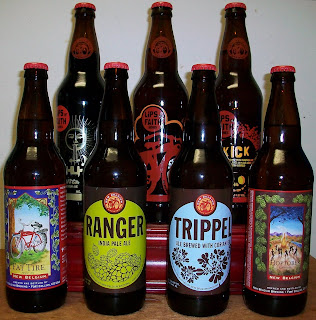 Review:
The beer pours a clear copper with light amber hues and a white to off white head.
The nose is rich with caramel malt aromas and very strong but complex hop aromas.

Well, that’s certainly an IPA but there is an interesting balance to this one.
We start out with a malt sweetness up front on the tip of the tongue. That only last for a split second; it is immediately replaced with a hop bitterness followed by a tingling over the tongue in mid-sip. There is a building hop bitterness throughout the middle of the sip. The back-end is not easy drinking, the hop robustness is so intense that there is almost a clinging of the jaws during the swallow. The finish has an equally intense hop presence but there is also a nice malt backbone to this ale that almost balances out the bitterness. The hop complexity on the finish is also very impressive; pine, floral and earthy hop flavors with citrus fruit notes. Again complemented by a nice caramel malt sweetness. There is a lingering hop bitterness to this ale but it is not as oppressive as most IPA’s. Sorry that was the non hophead coming out.
All and all this is a very impressive IPA. It also has an almost imperial quality to it.
Sorry for the short review but I am writing this while facing tornado warnings from hurricane Irene that is hitting us pretty good right not.
I’m going for a B+ for sure. Now most hop heads will most likely disagree with that. This is a very good IPA that I will have again. It just seems to be slightly lacking an A rating.
Posted by John at 8/31/2011 10:35:00 PM