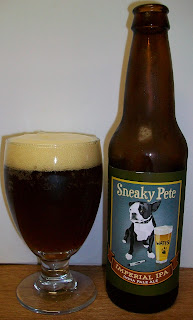 Sneaky Pete Imperial IPA
Brewed for:
Kysela Pere Et Fils, Ltd.
Brewed by:
Laughing Dog Brewing
Ponderay, Idaho, USA
American Double / Imperial IPA
10.00% ABV
Commercial Description:
Sneaky Pete is a blend of five hop types: Simcoe, Glacier, Centennial, Vanguard and Hallertuaer, with Simcoe playing the dominate role at 30%. In addition, three separate malts were used: Honey Malt, Rye Malt, and Munich Malt. The brew has a copious aroma of white grapefruit, citrus overtones, a complex rich middle and long flavors in the finish; a real beauty. Finished with wild clover honey.
(RateBeer.com)
General Pricing:
12 oz bottles: ~$11.00 4 pack
Background:
I asked my son John to pick up a few summer beers that I have not reviewed. This is one of those beers.
Review:
The beer pours a hazy amber with orange hues and a fairly rich off white to tan head.
The nose is nice with sweet caramel malt aromas and a very interesting hop complexity. There is just about every hop aroma blended on this nose; very impressive.

AHHH, what a nice first sip. That a smooth, rich and warming experience with just the right amount of bite on the end.
The experience starts out with a caramel malt sweetness up front. Then that is followed by a very rich complexity of a building hop robustness in the middle of the sip. There is also a tingling as the ale washes over the tongue in mid-sip. The back-end is surprisingly easy drinking for such a big beer. The growing hop robustness builds to an almost bitterness by the time you get to the top of the swallow. At that point at the top of the swallow there is also a fairly heavy hesitation but it is easily overcome. The swallow is fairly smooth with just a slight carbonation release. The warming effect of this ale hits your chest before you get to the finish. The finish is delightfully balanced with rich caramel malt flavors and the most pleasant robust hop complexity. With all of these hop flavors it is really impressive to me that this beer never gets overwhelmingly bitter. It really maintains a nice smooth and rich quality without a strong bitterness. Just like the nose indicated there is a multitude of hop flavors; earthy, pine, citrus and floral. There is a lingering hoppy bite on the final aftertaste but is not the typical American IPA bitterness. What a great experience.
The head on this beer has not quit. It has diminished to a thin protective layer over the top of the beer and it is leaving some very impressive lacing.
This beer is just getting better and better as it warms.
We are now at 70 degrees and the malt flavors are more pronounced and the hop bite seems to have diminished a bit.
This is an exceptionally good imperial IPA. I’m really enjoying this one.
Wow, that was smooth and delicious to the last warm drop.
I’m going for an A on this beer. What a great experience.
Posted by John at 8/31/2011 09:40:00 PM