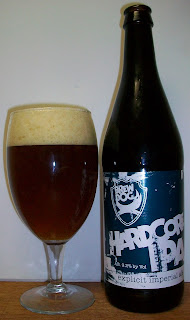 Brewed by:
BrewDog
United Kingdom (Scotland)
American Double / Imperial IPA
9.20% ABV
Commercial Description:
Bottle: Filtered. Cask: Unfiltered.
Also sold as Tesco Finest American Double IPA
Ingredients: Maris Otter, Crystal malt, Caramalt; Centennial, Columbus, Simcoe hops. Dry Hops: Centennial, Columbus, Simcoe. IBU 150
This little bottle has a grandiloquent story to tell. 2,204 malted Maris Otter grains gave all they had to offer the world to provide the robustly delicate toffee malt canvas for the ensuing epic. 6 Hop Cones willingly sacrificed themselves in fiery cauldron that is our brew kettle to ensure your mouth is left feeling punished and puckering for more. 9,900,000,000 yeast cells frantically fermented their little hearts out as the sugars were magically turned into alcohol in the dark depths of our fermentation tanks. This explicit ale has more hops and bitterness that any other beer brewed in the UK. This is an extreme beer rollercoaster for freaks, gypsies and international chess superstars. (RateBeer.com)
General Pricing:
22 oz bottles: ~$6.00 Each
Background:
This one just showed up in the beer fridge after a party at the house.
Review:
The beer pours a clear dark copper with orange hues and a off white head.
The nose is American IPA with pine and grapefruit hop aromas with little of anything else on the nose.

Wow, that’s an IPA that just hits you in the head with bitterness.
The taste starts out with a malt sweetness up font on the tip of the tongue but that only last for a split second. That is immediately replaced with a building hop tingling and robustness over the tongue during the middle of the sip. This robustness turns into downright bitterness even before you get to the swallow on the back-end. All through the swallow this bitterness keeps growing. The finish is very intense with an explosion of grapefruit and pine hop bitterness. The final aftertaste is a lingering hop bitterness.
This beer is great for Hop Heads but I don’t find it balanced at all. Even as an American Double IPA there is really no malt aspect to this beer it is all hops and bitterness.

Now, I have to say that my hop head daughter Molly just commented on how good she thought this beer was. She also called me a Hop Hater. Well, I guess if the shoe fits…
I don’t know about that but IPA’s are not my favorite style of craft beer. Usually I find that Double/Imperials are very good since they are usually more balanced with a higher malt aspect than a typical IPA. So even for the richer malt presence that beer is still not balanced, not even close it is all hops all the time.
Still all and all this is not a bad beer for the style.
I’m going to give this a B. That is being generous overall but I think it's fair for the style.
Posted by John at 8/31/2011 01:33:00 AM