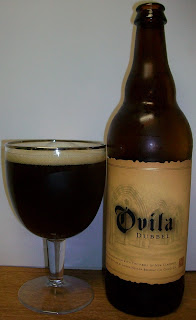 Brewed by:
Sierra Nevada Brewing Co.
Chico, California, USA
Dubbel
7.50% ABV
Commercial Description:
Ovila Abbey Dubbel is brewed in the abbey tradition, and perfect for the re-birth of spring. Clear and deep copper in color, this Abbey Dubbel has a complex and rich malty sweetness with hints of caramelized sugar. The aroma is a heady and layered mix of fruit and spice, with hints of clove, raisin, and black pepper from the use of an abbey style yeast
(RateBeer.com)
General Pricing:
750ml bottles: ~$11.00 Each
Background:
This was the third is a set of beers that I got from Jim for my birthday. I have never had this beer from Sierra Nevada before so I am really looking forward to trying this.
Review:
The beer pours a hazy brown with ruby hues and a modest off white to tan head.
The nose on this ale is also modest with just a few faint aromas of toasted to roasted malts and secondary touch of sweetness and some yeasty notes.

Not bad. This beer has a lighter overall mouthfeel and body than I expected. But there is a nice caramel malt finish and aftertaste.
The taste starts out with just a hint of malt sweetness up front on the tip of the tongue. That is followed by pretty uneventful middle of the sip. As this beer rolls over the tongue it does not leave much of any impression. The back end is fairly easy drinking with a carbonation release during the swallow. The finish is nice but once again there is not much flavor. The finish has some modest but very pleasant toasted malt flavors along with a touch of floral hops and yeast. The final aftertaste is a modest lingering caramel malt flavor on a yeasty note.
We are still pretty cold at 53 degrees maybe this will pick up some more flavor as it warms.
Well, this is warming but it’s not getting any better. I guess that’s not fair. This is not a bad beer I just expected a richer experience since this is an Abbey Dubbel.
The flavors are not bad at all. There is a light almost refreshing aspect to this beer that has setting me back from actually enjoying this beer for what it is not what it isn’t.
So this is a very easy drinking Dubbel with nice toasted almost roasted malts on the finish.
Now that it has warmed and opened up I am picking up more flavors including some spicy notes on the finish.
Another really nice thing about this beer is that it has not picked up any off flavors and we are close to room temperature now.
All and all I am really enjoying this beer. It is light in body and mouthfeel for the style but it is a very nice drinking beer.
I’m actually going for a B on this beer. I warmed up to it as it warmed up. All and all this is a nice tasting Dubbel, light but nice.
Posted by John at 7/31/2011 11:21:00 PM