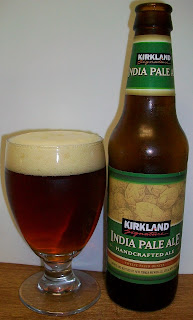 Kirkland Signature India Pale Ale
Brewed By:
Kirkland Signature / Costco Wholesale Corporation
Issaquah, Washington, USA
American IPA
6.50% ABV
Commercial Description:
Coppery brown with rich, malty character-this perfectly brewed amber ale gets its good looks from the dark-roasted crystal malt that we import from England. To give it some Western flair, it is moderately hopped with hops straight from the Yakima Valley in Washington. ABV 5.7% Bitterness 25 IBU. Contract brewed for Costco by the Gordon Biersch Brewing Company under the brewer name Hopfen Und Malz (for the west coast market) and since mid 2009 by Matt Brewing as "New Yorker Brewing Co." (for the east coast market).
(RateBeer.com)
Note:
Contract brewed by The Matt Brewing Company under the label New Yorker Brewing Company, Utica NY.
General Pricing:
12 oz bottles: ~$19.00 case
Background:
Just on a whim I picked up a variety case of this beer at Costco the other day. I bought one of these a couple of years ago. At the time I thought the beers were drinkable but I never reviewed them. I also noticed that this case has a few new beers that were not in the old one. Well, this is the last of the beers in the variety case. So far they have all been just average beers. Let’s see how the IPA is.
Review:
The beer pours a clear dark amber with rich ruby hues and a fairly rich off white head.
The nose is nice with caramel malt aromas along with a predominate but pleasant hop aroma. The hops are the main thing on the nose but do not seem overpowering.

That first sip was not bad. It does not seem as well balanced as I would like it but it’s a good basic American IPA.
The taste starts out with a caramel malt sweetness up front for just an instance followed by a tingling effervescence over the tongue in the middle of the sip. There is a building robust hop bitterness toward the back-end. The swallow is fairly easy for a hoppy IPA. The finish is typical American IPA with some caramel malts but mostly a robust hoppy bite of pine with grapefruit hop flavors. There is a lingering hop bitterness on the aftertaste that stays with you. It is not completely overpowering but it is lingering.
The head has diminished to just a protective layer over the top of the beer. The lacing on the beer is quite impressive.
All and all this is a pretty good American IPA, well, as far as American IPA’s go. Of course IPA’s are not my favorite craft beers but this one is drinkable.
The IPA is not very well balanced but then again I find that most American IPA’s aren’t well balanced. This is not quite battery acid hoppy but this is a very bitter beer.
This beer is getting a little harsh as it warms up. I don’t have my thermometer but this is now getting very close to room temperature.
I’m going for a C+ on this one. It’s not a bad IPA but it is not well balanced and very hoppy with a lingering pine bitterness.  Actually if you like the typical American IPA you will like this one.
Posted by John at 7/08/2011 11:22:00 PM