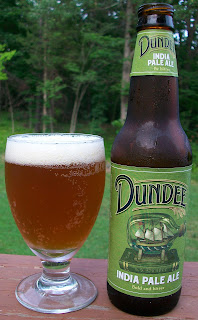 Dundee India Pale Ale
Brewed by:
Genesee Brewing Co. / Dundee Brewing Co.
Rochester, New York, USA
American IPA
6.30% ABV
Commercial Description:
Our India Pale Ale is brewed with an aggressive hop profile derived from Amarillo and Simcoe hops. A blend of Crystal malts creates the backbone which supports the hop character without diminishing it.
Formerly JW Dundee’s India Pale Ale
60 IBU
16.5°
(RateBeer.com)
Background:
I received a variety case of Dundee Craft Beer for my birthday. The only Dundee that I have had was the Honey Brown and it’s been a long time since I’ve had one of those. (Like 5 years or more) I did not know that they made any other craft beers so these next few reviews will be interesting as I sample my way through the case.
To set the stage, I’m vacationing at my sister-in-law’s house in Front Royal VA. I have been doing some late afternoon early evening reviews from the deck after a long hot day playing with the kids in the poor. So to continue our “Deck Side” reviews here is the last of the sample case from Dundee. It’s their India Pale Ale (American IPA).
Review:
The beer pours a copper color with amber hues and a fairly rich off white head.
The  nose is modest with light malt aromas with noticeable but not overwhelming hop presence.

That’s my kind of an IPA. I’m not a hop head so this lighter IPA is just right for me. That was a very pleasant first sip.
The taste starts out with a light malt sweetness up front on the tip of the tongue. That only last for a split second and is immediately replaced by hop bitterness. This hop bitterness builds through the middle of the sip. Just as you get to the back-end this seems to diminish. It is almost floral by the time you get to the top of the swallow. The swallow is almost effortless but there is a noticeable hesitation. You are expecting this to turn extremely bitter but it doesn’t. There is a slight carbonation release during the swallow that add a refreshing aspect to the experience. The finish is pleasant clean and crisp with a refreshing hop bite. There is very little of an aftertaste, just a slight lingering hop bitterness.
At no time are the hops in this beer overpowering. There is a caramel malt backbone to this beer that is present throughout the experience. This is a nicely balanced IPA. Perfect for me since I’m not a big fan of overly hopped beers.
These beers remind me of the Saranac Beers. They are brewed to be widely drinkable not extreme. All of these Dundee beers have had that same easy drinking aspect to them.
This is a very nice American IPA. For most hop heads this will seem like an American Pale. Actually I have had hoppier American Pale Ales than this IPA.
There is not much complexity even the hop bitterness seems to be on the same note.
All and all this is a very nice drinking beer; perfect for a hot summer evening.
This is a solid B+ for me, maybe even an A-. There is a strong hop presence but at no time did it overpower this beer. The malts in this beer held their own through the whole experience. This is a winner for me; nicely balanced and refreshing American IPA.
Posted by John at 6/11/2011 12:14:00 PM