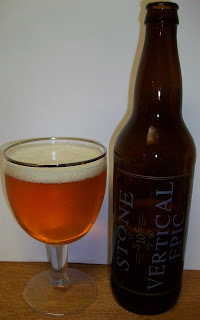 Commercial Description:
This ninth edition of our Stone Vertical Epic Ale series takes two interesting left turns. A Belgian-style golden triple is the starting point of this beer, but the first left turn is nearly immediate with the addition of dried chamomile flowers, triticale, and Belgian amber candi sugar. The second, and rather unusual left turn takes us half an hour up the road from Stone to Temecula courtesy of the addition of just-pressed Muscat, Gewurztraminer and Sauvignon Blanc grapes from our friends at South Coast Winery. As the Stone Vertical Epic Ale series has moved through the calendar, we found that the brewing schedule for a 10.10.10 release coincided nicely with the grape harvest, neatly providing an interesting twist in this epic ale.
(RateBeer.com)
General Pricing:
22 oz bottles: ~$8.00 each
Background:
I bought this back in October when it first came out. I put it in the beer fridge just before Thanksgiving and it has been sitting there ever since. This is not the recommended way to treat beer. I typically store the beer in the cellar and then chill it just before serving. In this case time got the better of me and I never got around to reviewing it. So do as I say not as I do. Store or age the beer in the cellar and then chill just before serving.
Review:
The beer pours a clear rich golden yellow with copper and orange hues and a white to off white head.
The nose is delightful with sweet light malt aromas with yeasty notes of citrus and spice. This is very inviting I can’t wait to dive into it.

That’s a strong Belgian Pale for sure. The only thing this is missing is that touch of yeasty Belgian Funk.
The experience starts out with a malt sweetness up front on the tip of the tongue then an almost creamy sensation over the tongue in the middle of the sip. The back-end is fairly easy drinking for such an ale. There is a slight hesitation on the top of the swallow, I’m assuming that’s from the alcohol. The finish has all the flavors of a Belgian Strong Pale but it is lacking those funky yeasty notes of a bottle conditioned Belgian Ale. There is slight final aftertaste on this beer. Not much just a hint of lingering sweetness.
This is a very enjoyable ale but I was expecting something more from this Vertical Epic series.
This beer is also a bit one dimensional. It’s a good tasking strong pale but there is no real complexity. Again that in itself is not a problem but you, well I, expect some complexity from a Belgian.
As this warms you can really taste the sweet alcohol. The overall beer has not seemed to open up any. The only real difference is the noticeable sweet alcohol on the finish.
For a rating I’m giving this a B-. All and all this was a good American representation of a Belgian Strong Pale. However it was very one dimensional and lacking the normal complexity of the Belgian Style.
Posted by John at 5/31/2011 10:05:00 PM