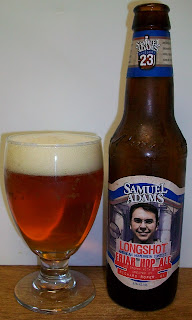 Commercial Description:
Richard Roper’s brew combines his love of hops with his affinity for spicy Belgian ales. The toasty caramel sweetness from the malt and Belgian candi sugar are balanced by distinct citrus hop notes, spicy yeast fermentation and hunts of orange and coriander. (RateBeer.com)
General Pricing:
12 oz bottles: ~$8.50-$11.00 6 pack, ~$31.00-$45.00 case
Background:
This is one of the winners of the 2010 longshot competition. The competition is run by Samuel Adams. It’s a home brew competition with the winners being announced at the GABF (Great American Beer Festival). Then the Boston Beer Company (Samuel Adams) brews the winner’s beer. I make it a point each year to by a 6 pack of the Longshot winners. They are usually very unique and well crafted beers. Plus I just think it’s the coolest thing, to have a brewer commercially sell the Home Brew Beer.
Review:
The beer pours a clear copper color with amber hues and an off white head.
The nose is delightful with sweet light malt aromas along with aromas a citrus and spice. This almost smells like a wheat beer with notes of banana and clove.

Ahhhh, that’s nice! What a great first sip. This has all the great classic flavors of a Belgian Pale Ale.
There is a light malt sweetness up front then a nice refreshing effervescence over the tongue in the middle of the sip. The back end is fairly easy drinking but there is a slight robustness during the swallow into the finish. The finish is packed with classic Belgian flavors; yeasty citrus and spice notes along with a nice hoppiness and sweet alcohol. There is very little of a final aftertaste just some lingering notes of spice and citrus.
I just downed on me that the slight hesitation on the swallow is from the alcohol. I just noticed that this was 9%. The alcohol is pretty well masked on this beer. I would have not suspected 9%, it feels more like 7. Its funny know that I know the alcohol is high there seems to be a warming effect from this beer.
All and all I’m really impressed with this beer. It has the great qualities that I like in Piraat and HoublonChouffe.
The hops in this beer at no point overtake the flavors. This beer is full of great flavors of light malts, citrus and spice with a hop finish that dries with a bite but does not overpower the ale.
I was a little hesitant when I saw that this was a Belgian IPA. Most of the American versions of a Belgian IPA for far short of the style for me. That is certainly not the case with this one. This is a solid A for me. What a great beer!
Posted by John at 5/31/2011 10:33:00 PM