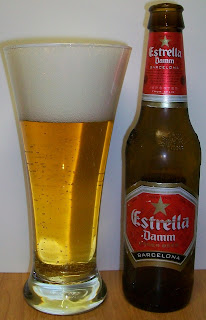 Commercial Description:
This beer is the jewel in the crown of Damm’s century-long beer-brewing experience. Since 1876, when Alsatian August Kuentzmann Damm founded the company bearing his name, numerous generations of master brewers have perfected this lager until it has become a landmark in the world of beers. This lager beer with a universally appreciated character and taste is ideal for drinking at any time. Its high quality is due to the finest selection of raw materials and the meticulous brewing process. It stands out for its creamy hops-flavoured froth and refreshing taste.
(ratebeer.com)
General Pricing:
12oz bottle, ~$10.00 6pack, ~$37.00 case
Background:
This was yet another gift from my friend Gene. I don’t know where he comes up with these beers but it is fun to review something that you know that you would not normally buy. So let’s see what this Barcelonan has in store for us.
Review:
The beer pours a clear pale golden straw color with a bright white head. There is a fair amount of combination, evident by the tiny bubbles rising up from the bottom of the glass.
The nose is very grainy almost skunky with some light floral hop aromas as well. It is not a very inviting nose; I actually would have expected this to be from a green or clear bottle.

Ok, well, yeah, well, I don’t know, let me try that again. I’m sorry it’s not bad; there are just some interesting flavors here that I did not expect. This is not your typical Adjunct Lager. Let me attempt a better play by play.
The taste starts out with little to nothing up front followed by a nice carbonation over the tongue in mid-sip. Toward the back-end you start to pick up some flavors. Somewhat nondescript at first then during the swallow it starts to turn a little skunky. There is an interesting hop profile that also comes out from the end of the swallow into the finish. The finish is pretty dry with a nice bit to it. There is a slight aftertaste of some lingering skunky flavors and a light hop bite. My tongue is tingling from the hops and effervescence.
I’m not really doing this justice. At no time was this foul or bitter. What I’m referring to as skunky is an earthy flavor that I can’t quite put my finger on. The closest thing that comes to mind is that flavor that you get from a green bottle German beer that is past its prime and light has changed it to a skunky flavor.
This is actually quite refreshing for an American Adjunct. It certainly is better than any of the American Macro counterparts.
Well I have to hand it to my friend Gene for fining the most unusual common lagers. This one is not bad. And that is best evident by the fact that it is almost gone. I only have a sip or two left.
I must say that the head on this beer never really quit. Even now that there is only a sip left in the bottom of the glass there is still a nice protective layer over the top of the beer. There is also very distinct level marks left by the lacing. Again, this is very unusual for an Adjunct Lager.
Actually as I look back at my empty glass the lacing is quit impressive.
My general rule is not to rate Adjunct Lagers but this is better than most. I really think I could get use to drinking a few of these at a party. Not that I would go out and buy it but I certainly would not refuse it either.
This is a very drinkable American Adjunct Lager. There are some interesting earthy almost skunky flavors with it and very nice hop bit on the clean finish. All and all it was pretty enjoyable for this style of beer.
So this is another drinkable American Adjunct Lager from my friend Gene. I guess it’s time to start returning the favor and share some good beers with my friend.
Posted by John at 11/14/2010 08:56:00 PM