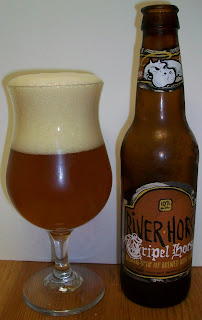 
Commercial Description:Notice a unique aromatic nose with a hint of vanilla esters, which comes from the Belgian ale yeast. Tripel Horse has a big body and rich mouth feel and finishes mostly dry with only a touch of sweetness. If you shy from some of the sweeter Belgian ales, we think you will enjoy this one. The palate improves with age, so keep some on hand and you can ride Tripel Horse down a new path with each opened bottle.
(ratebeer.com)

Background:I gave my oldest a few dollars with instructions to come back with some High Test brews. This was one of the brews she came back with.

Review:The beer pours a hazy copper with orange hues and a fairly rich off white head.

The nose is nice with sweet pale malts along with aromas of spice and fruit.

First off the alcohol is not masked at all in this beer. Actually this may be the most predominate aspect of this beer.

Boy I’m having a hard time giving a play by play on this one. There really only seems to be one note of alcohol throughout the taste. Well, that may not be fair but there is not much going on with this beer.

Usually up front there is a malt sweetness but not on this beer. The taste is pretty flat up front with a building alcohol intensity in mid-sip. The back-end is a little more intense; this is not an easy drinking beer. You can tell throughout the swallow that this is a big beer. The finish does have some spicy notes but that is also masked by the alcohol. The final aftertaste does have a little bit of a lingering pale malt flavors.

The bottom line for me is that this beer is not a tripel but an Imperial/Double pale ale. I know that they state that they use Belgian yeast but this beer is missing all of that great complexity, esters and fruity notes that are usually generated from this yeast.

It is a common mistake for American brewers to make Belgians overly sweet. In their attempt not to make the same mistake did the opposite. But the result is a beer without a good flavor just high in alcohol.

I am actually forcing the last few sips. I am really not enjoying this beer at all. This is not warming well either.

It is just down rite nasty at 68 degrees.