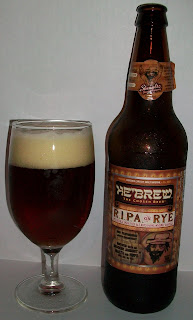 Commercial Description:
Savor the provocative spirit of R.I.P.A on RYE, our HE’BREW monument to the richness, the bitterness and the sacred sweetness that is life...

Background:
There really is no background for this beer. I just saw it and thought I would pick it up and review it. However I am a big fan of this brewery. Ever since I found their anniversary beers, Jubilation 12 sold me and then the He'Brew Jewbelation Bar Mitzvah (13) through me for a loop, what an outstanding beer.

Review:
The beer pours a clear dark amber with copper hues and a fairly rich off white head.

Rich caramel malts on the nose along with a fairly strong hop aroma. This almost smells like a typical American IPA but with a much maltier background.

This is a pretty intense beer. That first sip did not floor me but it was an eye opener. I really did not know what to expect. This has all the characteristics of an imperial/double IPA along with a unique twist. I assume that twist is the Rye.

It starts off with a caramel malt sweetness up front on the tip of the tongue. That only last a split second and it is immediately followed by a creaminess then a building malt and hop bitterness through the middle of the sip. The back-end is a little intense and not very easy to swallow. Not bad at all but it is not a very easy dirking  beer. There are natural reflexes that trigger on the back-end that tell you that this is no lightweight. The finish is fairly dry with a robust hop finish.

There are some nice hop flavors in the beer but it is also pretty well balanced. The hop aromas on the nose, the middle of the sip hops and the finishing hops are all different hop flavors, very nice hop complexity.

Now I’m no hop head. But when a large amount of hops are balanced with a larger amount of malts you have a nice imperial/double and that’s what this is. This is good, very good.

It has warmed to about 60 degrees and it is really starting to open up. It is getting smoother as it warms as well as more flavorful.

I’m really not picking up the rye. I have not had too many rye beers so I’m really not sure what I’m looking for. This beer is so intense with hop and malt flavors it’s hard for me to pick up any rye malt flavors.

BTW, the lacing has been outstanding.

The longer I drink this the more I like it.

I am just about to the end of the bomber and I am starting to feel the effects of the alcohol.

This head has never quit. There has been a nice protective layer over the top of the beer and the lacing has been amazing.

The final sips were around 70 degrees and till very good. Even at this temperature the beer picked up nothing unpleasant whatsoever. This is a good to the last warm drop beer.

I really did not know what to expect from this beer. I was pleasantly surprised, this is a great imperial/double IPA. Like I have said I’m no hop head and American IPA’s are some of my least favorite beer styles. But this is no typical IPA.  This is an excellent Imperial/Double IPA. As intense as this beer is there is also a unique smoothness to it.

I’m going for an A on this one. This is just an excellent beer.

I highly recommend this beer to anyone that likes the more intense beers; imperial/doubles, barleywines etc. If you like Dogfish Head Squall or Southern Tier Unearthly you will love this one.  It’s all of that with a unique smoothness to it.
Posted by John at 7/22/2010 12:18:00 AM