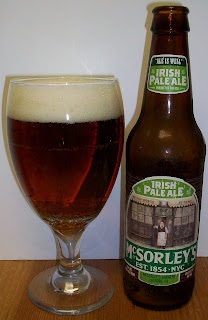 
Commercial Description:At McSorley’s ale is well. McSorley’s Irish Pale Ale is from the old house at home. Established in 1854 in NYC and brewed by McSorley’s Brewery in Wilks-Barre, PA. Brewed in the tradition of the historic walls of McSorley’s Old Ale House. It took 116 years, the pressure of public opinion and ultimately the authority of a court order for McSorley’s to surrender. By the mid 1970s, McSorley’s allowed woman inside the bar at 15 E. 7th St for the very first time. Ah, but the owners did not completely forgo tradition, women would wait until 1986 to get their own restroom.
(ratebeer.com)


Background:There seems to be a multitude of credits and confusion on who actually brews this beer. There is no doubt that brewer is licensed by McSorley’s of NYC but it seems like it was farmed out to Pabst Brewing Company who farmed it out to one of their subsidiaries. The bottle say’s McSorley’s Brewery, Latrobe PA. So from that I would assume the old Rolling Rock brewery that was bought out by Pabst. Rate beer claims it is brewed by Lion Brewery, Inc. in Woodridge, Illinois. Beer Advocate claims it is Lion Brewery in Wilkes-Barre, PA. It doesn’t really matter but it’s usually a bad sign when a beer is farmed out like this. So let’s see what it’s like.

Review:The beer pours a pale amber with reddish hues and a white to off white head. Nicely carbonated with a fair amount of tiny bubbles rising up from the bottom of the glass.

This particular cervoise glass has a sharp recess in the bottom and it is collecting the co2 and releasing a steady stream of tiny bubbles just as if it were etched.

There is a nice little nose on this beer. Nothing unusual or over the top just a very nice nose, caramel malts and a slight hop aroma, very nice indeed.

Now that’s a drinkable Irish Red, well, this may technically be an Irish Pale but at any rate it’s pretty darn good. Much better than that stuff I had last night, Harpoon Irish Red link.

Nice caramel malts upfront on the tip of the tongue then a pleasant cleansing effervescence over the tongue. The back-end is smooth and easy to swallow with a fairly dry hop finish. There is not much of a lingering aftertaste; slightly hoppy but not bitter with a pleasant malt sweetness.

This is a very easy drinking beer, nothing special just a nice pleasant brew.

This beer is also warming well for a pale ale. It is now at 72 degrees. It is picking up a slight off taste to it but it is still quite drinkable.