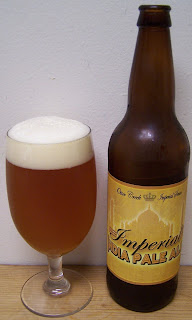 Pours a pale copper color with a rich white head.

Nice blend of caramel malts and hops on the nose. Just a good smelling beer, can’t wait to dive into it.

That is one intense beer. This beer if full of hops, malts and alcohol and it seems to hit you all at the same time. I may have to let this warm a little to dissect the flavors I’m experiencing in the first sip.

The head has somewhat diminished to just a protective layer over the top of the beer and it is leaving unbelievable lacing on the glass.

The taste does start with fairly rich caramel malts but it is quickly replaced in mid-sip with high carbonation and a rich earthy hop flavor then the back end dries a bit from the alcohol and a different finishing hop bitterness. You are left with a very rich lingering hoppy aftertaste much an American IPA.

As this beer warms a little it is much smoother. Or perhaps I’m getting use to the hoppiness of the brew. At any rate I am starting to enjoy this beer a little more now that it has warmed and opening up a little. At 61 degrees it is getting better and better, you can really appreciate the malts now. They were getting lost in the hops earlier. The end of that first glass was at 65 degrees and it was still pretty good.

I did not but the 22oz bomber back in the frig so this second glass should start off pretty much where I left off in the fist glass.

I am really enjoying the second glass and I can start to feel the alcohol. All and all it’s not a bad beer. It is not a nicely balanced as other imperial IPAs  but it’s not bad either.

The end of this second glass is now at 70 degrees. At this temperature you would expect either real unpleasantness or a richer malt flavor but I’m not getting either. There is nothing offensive about this beer but it is a very bitter beer; even for an imperial/double IPA. This beer does not have the extra malt character that I like in an imperial/double. This is more like a high alcohol IPA with out the richer malt flavors.

I am also noticing some sediment in the bottom of the glass so it appears that this was also a bottle conditioned 22oz bomber.

This beer is not very high on the rating scale for me. I have had several imperial IPAs that a far superior to this one. Not that this was bad or that there was anything wrong with it; it just did not capture me. To me an Imperial IPA should have a much richer malty flavor then this beer has.