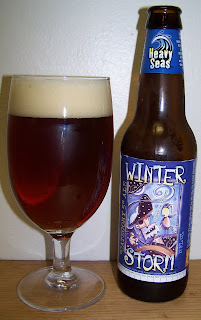 Sweet caramel upfront but not for long, it is quickly replaced with light hoppiness in mid taste then a more intense finishing hop bitterness but also with richer malt sweetness giving it a nicely balanced finish. Don’t get me wrong this is a hoppy beer but it’s not all hop bitterness there is a nice malt background to this beer also.

The head has diminished down to a nice protective layer over the top of the beer with a ring around the edge of the glass and it is leaving some nice lacing.

The beer is opening up nicely as it warms up. It is much smoother with in increase in the malt flavors. The hop bitterness is still there but somewhat diminished.

This is a very good ESB. I highly recommend it to anyone who likes a little bite in their beer but not an overwhelming hop bitterness.
Posted by John at 11/11/2009 11:41:00 PM