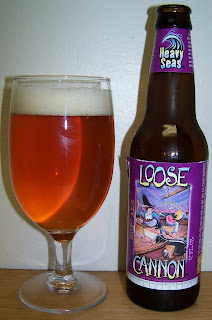 Pours a pale copper with a white head. The head diminished fairly quickly but it looks like it will leave some lacing.

Hops, Hops, and more Hops on the nose. There may also be a slight sweet malt aroma but it’s having a hard time getting though all the hops.

Another typical American IPA. It seems like the whole taste in this beer from the beginning to the end of the sip is all hops. Any real malt flavors are being washed out by the hops. This beer is all hops with little to no malt character at all.

Sorry this is going to be a short review. There is not much to say about this beer since I don’t really care for the typical all hops American IPAs.

As predicted this is leaving some pretty impressive lacing.