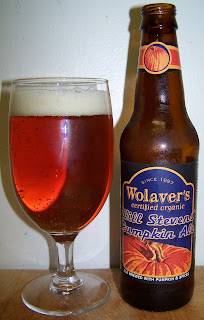 
Pours a nice copper with orange hues and an off white head. Moderate carbonation with tiny bubbles rising up from the bottom of the glass. The head diminishes but the carbonation keeps adding to it at the same time a very interesting effect

The nose almost all pumpkin not very spicy just a nice pumpkin aroma, some sweetness and a little hop presence.

Wow that was an experience. A touch of sweetness up front then effervescence tingles over your tongue, more but different sweetness on the back end a little drying hop finish and the final aftertaste is a pleasant light caramel malt, pumpkin, just a little spice and a dry hoppiness not a hop bitterness. That was a Very enjoyable first sip. I love these beers that give you such a sensory experience in one sip.

This beer is so is carbonated you almost get that bloated feeling.

The head has diminished to just a patchy film and a ring around the top of the glass but there is some impressive lacing for a beer that did not generate much of a head.

As the beer warms up and opens up a little I’m getting more of a robust malt flavor and a slight but more of a hop bitterness. Still very pleasant and enjoyable.

This beer is not at 64 degrees. The carbonation is just about gone which leaves more of a malty taste to the beer and it’s still pretty darn good.

All and all I’m fairly impressed with this beer. It’s got a fair about of spice and pumpkin but there is nothing artificial or overpowering about the flavors. The high carbonation in the beginning made this a very refreshing ale. Even after it warmed to almost room temperature it still held its own. I can’t really find anything negative about this beer. It’s a solid B for me. A good pumpkin ale from Otter Creek.

Here is a review by John, BierVlog