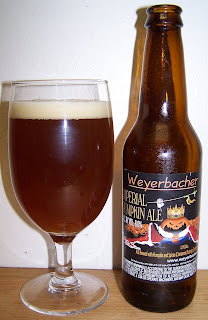 
Pours a dark amber/copper with reddish/orange hues and an off white head. It is not totally clear but it does seem to be filtered a little.

Pumpkin Pumpkin and more Pumpkin spice on the nose. There is also a dry hoppy aroma.

Well that was unexpected. This was not as spicy as the nose would lead you to believe. This beer has a little malt sweetness up front then a nice carbonation over the tongue and a very pleasant dry hop and pumpkin spice finish. I thought it would be more intense than this. This is really good. I am pleasantly suppressed; sometimes Weyerbacher goes over the top on their beers but this is nice, very nice. This may have the strongest spice flavors of all the pumpkin beers I’ve had so far this year but it works for me. I don’t know why but it does, I really like this beer. I usually like less spice and more plan pumpkin flavors but this is OK.

Let’s see what happens as this warms up a little.

We are at 58 degrees now and this is even better than it was earlier. It’s opened up a little and there is more of a malt flavor in the background now. I still can’t believe I like a pumpkin ale that is this spicy. The final lingering aftertaste is of sweet caramel malts and pumpkin spice.

The head has completely disappeared and there was little to no lacing left on the glass. I just looked to see what the ABV was on this beer since they call it an Imperial; it’s 8% but you don’t taste or feel the alcohol in this brew. That may be just hiding behind the pumpkin spices.

All and all I’m pretty impressed with this beer. This is a really good Pumpkin Ale. I’m not sure if 8% would qualify for an Imperial label but I’ll go along with it. This is the highest ABV pumpkin ale that I’ve had so far this year.

Finishing this glass at 65 degrees and it’s picking up a slight harshness on the back end of the swallow but this is still a very impressive Pumpkin Ale.