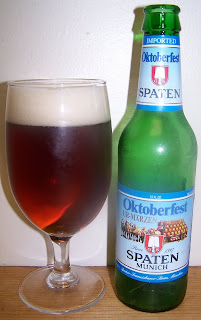 
This beer pours a clear dark amber with an off white head and moderate carbonation.

Interesting nose on this beer; light caramel malts, mild hop presence and that good old fashion German skunk. I still don’t know where the skunk comes from but it seems to be in a lot of German beers especially if bottled in a green bottle.

Well that German skunk is in the taste of this beer also. It starts with a nice caramel malt sweetness then a little bit of that bite starts to make itself known but it is quickly replaced with a cleansing effervescence and then, you guessed it that German Skunk along with a dry hop finish. The skunky bite stays with you longer than the hops do but it also fades to little or no final aftertaste.

The beer is warming up a bit; it is now at 64 degrees. It has gained a little more of a malt sweetness as it opens up a little.

All and all this was a good beer. Not my favorite Oktoberfest but still a good beer. That German hop and skunk taste but me back just a little. I don’t mind it on a pilsner or other lighter more refreshing beers but I really didn’t care for it as much on an Oktoberfest.