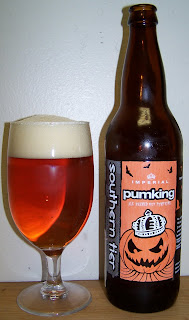 This is the last pumpkin ale that I have in the house. I may find a few more but this will most likely be my last pumpkin ale review; especially since I have been eying up a variety case of Oktoberfest brews at Stateline.

Pours a light clear copper with a rich white head.

There is a very different aroma from this beer. I can’t quite put my finger on it; it’s sweet almost vanilla.

Wow, whatever that aroma is on the nose is actually on the taste also. This is so different I’m not sure what I think about it, well not yet anyway.

This is really odd. It does not taste bad but I’m not getting pumpkin. I am still dumbfounded by this beer. It is nothing like I expected, it’s more of a sweet vanilla than a pumpkin.

It is not getting any better as it warms up. Sorry to be such a downer on this beer but I really don’t care for it. Like I said earlier it’s not bad it’s just not for me.

I just did a quick search on some reviews on this beer and apparently I’m the only person in the world that doesn’t care for it. Like I always say it’s all a matter of taste, your personal taste and I just don’t taste with everyone else tastes in this beer.

Ok we are at 66 degrees and I have to kill the king. This is certainly not one to nurse for long time.

I may try this again just to see if it’s still the same. Hopefully it will be on someone else’s dime. I’ve tasted enough beer under various conditions so I can tell you that time and place does matter. Your pallet does change on how you feel and what you have eaten before or with a particular beer. So I will try this again. Or it could be that there is something in this brew that just does not register on my pallet.

Ok it’s not at the bottom of the pumpkin ale list. It’s not a bad beer or a badly brewed beer and I can appreciate the craftsmanship in it. Either I am missing something that is there or they are missing something. I do not pick up an authentic pumpkin flavor in this beer it turned out like a sweet cinnamon vanilla bean.
Posted by John at 10/15/2009 12:55:00 PM