Score! On Some Oktoberfest and Fall Brews

I stopped in at Stateline Liquors like I usually do on Fridays after work. Our friends from Wyerbacher (Easton PA) were there having a free rep tasting so I had to partake. I bought a few of their beers that I will probably review sometime later. For now they ended up in the beer cabinet.

I got my shopping cart and walked around the store picking up odds and ends trying to stock up the beer cabinet. I had my eye on an Oktoberfest variety case for some time but I didn’t see it. I ask Matt, one of the managers and he said that they had sold out of them. When I asked if they were going to put any more together he said that he would put one together for me and if I could wait it would only take a few minutes. So I continued to shop around until Matt was free to put my case together. Shopping at Stateline isn't hard to do since they now carry over 1600 beers. Matt comes back with a cart and starts to pick up two of each of the beers for the sampler case. Then it turned into, what do you want? Well I was like a kid in a penny candy store, two of these and two of those, oh yeah I’ve been waiting to try that, and there was at least one of, don’t bother with that (Sam Adams). It was awesome walking around the store with Matt picking up beers for my variety case.


This store is just incredible; good people, friendly service, they just seem to go out of their way for everyone that come into the store. I just can't say enough about Stateline Liquors.

Well here are the results of my big kid trip to my candy store. I will be posting reviews for the new beers in the next week or two. 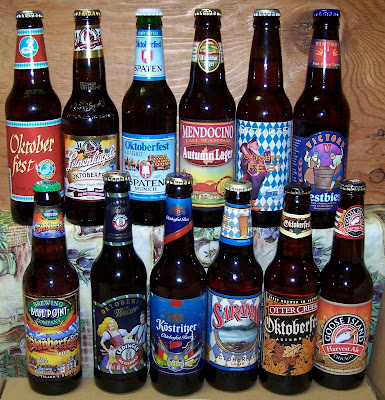