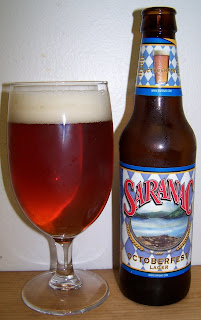 Pours a clear copper/amber color with a rich white head. This is also a highly carbonated beer with lots of tiny bubbles rising up from the bottom of the glass.

Nice cameral malt sweetness on the nose. There are also some flowering hops aromas. This is a very nice smelling beer, I hope it taste as good as it smells.

Not bad but there is an awkward taste on the back end and finish. It’s not necessarily a bad taste but it’s an odd bitterness that does not seem to be from the hops or malts.

Whatever that foul taste is on the back end it gets even worse as the beer warms up.

The sip starts out with a nice little caramel malt sweetness then a pleasant effervescence over your tongue then just when you think this is building up for a wonderful climactic finish you get hit with one of the worst finishes in the history of brewing. OK, a bit of an exaggeration but the finish is not just a let down its awful tasting.


The finish went from awkward to foul to awful as this beer warms up. I can’t let this warm up any more. It’s at 61 degrees now and it’s just about all I can take.