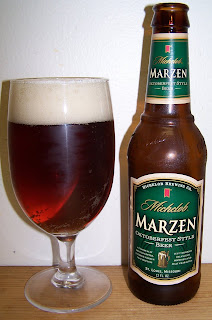 I just realized that this is my fiftieth beer review. If I had known earlier I probably would have chosen a different beer. Oh well Michelob it is.

Pours a dark copper color but it has a very different hue to it; it’s almost gray. It’s not those amber reddish orange hues that I’m use to. There is also a fairly rich looking off white head.

There is not much on the nose of this beer just a light almost grainy malt aroma. I gave the beer a fairly aggressive swirl and I got the must unusual aroma. I guess its malts and spices but it comes off as a chemical smell, like a turpentine or paint thinner; very odd.

Well there is not much on the taste either. There is nothing bad or unusual about it, it’s just a boring beer. It’s really not much better then any of the standard American Macro Lagers. Well, maybe it is a little better than that. It may have just a little more flavor but it does also have that typical cereal taste to it like the macros do.

As this beer warms up it is picking up a harshness on the back end of the swallow. It is still drinkable but turning a little unpleasant.

All and all this is not a bad tasting beer. It did get a little tough as it warmed up. Basically this is just a typical lager nothing really offensive but also not very enjoyable. I’m gong to give this a C. I can’t really find anything wrong with it but I really can’t recommend it either.
Posted by John at 10/22/2009 12:16:00 PM