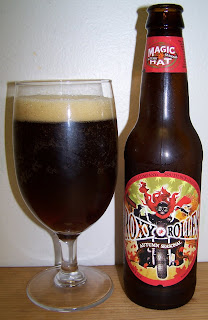 
It pours a dark brown almost opaque with just a hint of reddish/amber hues. This beer also has a very rich looking off white almost tan head.

Nice rich malt aromas on the nose with notes of toffee and chocolate. Wow, this is a very nice smelling beer. I can’t wait to dive into it.

Oh my, that was unexpected. This is a medium to full bodied beer; almost stout like. I’ve had several stouts and porters that did not have this much going for them. This is a very tasty beer from Magic Hat.

The head has diminished to just a film on top of the beer but it is leaving some very impressive lacing.

Sweet roasted malts up front then a nice effervescence over the tongue followed by a hop and roasted malt bitterness and then you are finally left with that classic roasted malt coating in your mouth like a rich porter or stout would leave.

This is classified as an American Amber/Red Ale but it is more like a Brown Ale. Actually I’ve had many browns and porters that a lighter and less flavorful than this brew.

Let’s see what happens as this ale warms up a little.

72 degrees and it still tastes pretty darn good. This beer sat for a half hour or more while I worked on something else. I took the temperature at 72 degrees and was almost afraid to take another sip. Kudos to Magic Hat this is a pretty impressive amber ale, still want to call it a brown.

There is a bitterness on the back end of this beer. I don’t think it’s all hops either, there is that same roasted almost burnt malt bitterness that you find in some of these roasted malt beers. It’s not bad but it’s not as smooth as you would think. It adds a certain robustness to the experience.

That bitterness is going to hold me back from giving this an A rating. But it is a solid B+ and a very pleasant surprise. I did not expect this good of beer especially after it warmed up to 72 degrees. Hats off to Magic Hat this Autumn Seasonal is a winner in my book.
Posted by John at 10/22/2009 12:30:00 PM