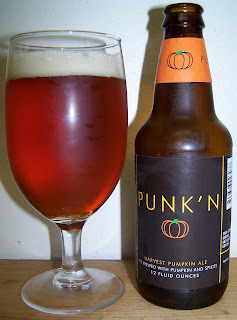 
Pours a clear copper/amber with orange/reddish hues and an off white head.

Light spice and malt sweetness and some flowering hops on the nose. All and all it smells pretty good. I hope it taste as good as it smells.

Very nice Pumpkin Ale. Sweet up front nice carbonation in the middle and a nice light finishing hop and mild spice on the back end.  There is no long lingering aftertaste with this beer. I know I’m only on the first sip but I’m liking this one already. At least it has some potential we’ll have to wait and see what happens as it warms up and opens up a little.

As this beer warms up a little it is gaining a more malty taste on the back end.
Not bad just more pronounced then it was earlier. This is a good beer. It has just a little more character than the harvest moon but not as well crafted as some other craft beers.