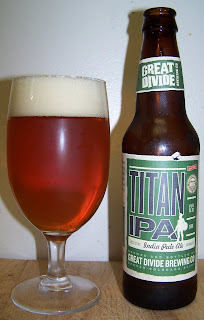 It pours a clear copper with almost orange hues and a very rich off white head. The head looks like it will stick around for a while and leave some good lacing. The beer is also nicely carbonated with a good amount of tiny bubbles rising up from the bottom of the glass.

Very hoppy nose with some caramel malt sweetness but the most noticeable aroma is the hops.

Wow that was a surprising first sip. Sweet caramel malts up front with an almost nutty background then you have a very present clean drying finish and finally the hops hit you from behind. I was expecting this to be all hops and just a little maltiness but not the case. This is an excellently balanced IPA. Very smooth up front and a nice bitty hop finish that does not overpower the beer.

The head has diminished to a nice protective layer over the top of the beer and it has left some very impressive lacing on the sides of the glass.

Boy am I surprised with this brew. Even the final aftertaste if you will, is a nice blend of malt sweetness and hops. Typically I find American IPA’s so hoppy that’s all you are left with is a lingering bitter hoppiness. This has a very pleasant finish, nicely balanced and quite enjoyable. Let’s see how it fares after it warms up a little.

It just keeps getting better; this is a very smooth and rich IPA. This is my kind of IPA with high IBU’s but also with a great malt counterbalance that is just superb. This is bordering on an Imperial IPA but I don’t think it has the alcohol content of an Imperial. It also does not have that intenseness of an Imperial/Double IPA. Wow what a pleasant surprise and what an excellent beer. This is a very drinkable IPA. It may be pushing the limits of malts and hops for some but it is very enjoyable.

I’m not a hop head. Generally I find most American IPA’s just too bitter to enjoy; well at least to enjoy more then one. Sometimes a beer can be so hopped up it’s almost a burning or scratching feeling left behind. I was kind of expecting that from this beer but boy was I astonished at what I got. This was just a beer left over in the beer fridge that my daughter bought during the week with some pumpkin ales. I really was not planning on reviewing it but it was a nice Sunday afternoon so I thought I would give it a try. I’m sure glad I did. I may have found my favorite IPA.

This is Excellent an A+ in my book for an American IPA. Wow just outstanding. If all IPA’s tasted like this I would be proud to call myself a Hophead. This is a must try for anyone looking for a full flavored beer with a good bite to it but is still mild enough to be refreshing and enjoyable.

Another great brew from Great Divide; this is just a notch or two down the intensity meter from their Imperial IPA, Hercules. Anything much more than this and you are looking at a sipping beer. This is still very easy to drink and such a flavorful beer, Hat’s off to Great Divide.
Posted by John at 9/22/2009 09:31:00 PM