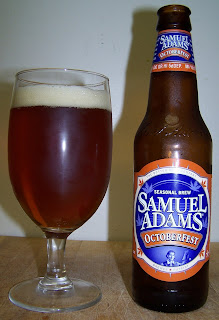 Pours a nice rich amber somewhat reddish, clear with an off white head. The initial head was very rich a little soapy. It looked like it was going to stray for a long time but it diminished to just a thin film on the top of the beer in a very short time.

The nose has some nice malts and hops aromas in it. Not the typical grainy smell of a lager but a richer caramel malt aromas with just a little hop bitterness sneaking in.

Highly carbonated somewhat refreshing but with an unpleasant finish. This is very disappointing, not a very good Oktoberfest at all. It’s not a really bad tasking beer but it’s not a very good beer either. There is a little more spice in this above what you would find in a standard amber lager. But behind all the good qualities of this beer is a very unpleasant almost metallic after taste.

Wow, I was really hoping that this would get better as it opened up but it’s not. This is an extremely disappointing Oktoberfest.

I wish I knew more about brewing beer so I could explain what this unpleasant taste is. It’s almost metallic but not quite. Sorry just can’t put my finger on it but it is very common in American lagers from the macro’s to Yuengling.

I guess I just expected more from Sam Adams. This is not a well crafted micro brew beer. Sam Adams has and should do a better job on this. This is at least the third year in a row I’ve noticed the quality of the Sam Adams Octoberfest decline. I was convinced 3 years ago that this was a very good Oktoberfest. Not as good as some of the German’s but a very good American version. Not the case at all with this one.

There are a lot of standard American lagers that are better than this beer let alone that this is suppose to be a very well aged and delightful brew.