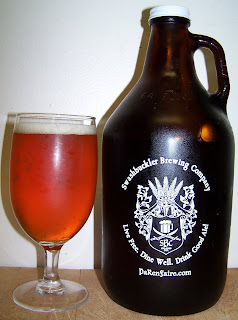 
Well I’m not sure how I like my oldest daughter being a Leather Wench at the Pennsylvania Renaissance Faire but I do like that she brings home a new brew every week from the Swashbuckler Brew Pup. This weeks Brew is their IPA.

This beer pours a nice copper almost amber with a slight orange hue and a very nice looking off white head.

There is a nice pleasant hop aroma on the nose, not as strong hop smell that I would expect from an IPA more of an English hop, subtle, sweet and flowering hop aroma. There is something different in the nose of this beer, can’t quite put my finger on it. It’s kind of an earthy and malty aroma, very interested, it may be English malts. Let’s see what it tastes like.

Wow, very hoppy but not quite overpowering. I thought it would start with a malty sweetness but the first thing I got was a hop bitterness then a little malty sweetness and then another type of hop bitterness with a final rather dry finish. Very unusual to actually detect different hops all in the same sip, maybe that’s the way a good IPA is suppose to taste. As I’ve said before I’m not a hop head and IPA’s are not my favorite style of beer. But I do appreciate a well crafted beer of any style and this is a well crafted beer.

I have never had a beer with this much hop complexity, usually the hops blend together into one taste but with this beer I can distinctly taste different bitterness’s.

It’s not all bitterness either there is a malty aspect to this beer, almost an English malt flavor. It’s a good thing I have a grower of this beer so I can try to figure it out over a few more glasses.

The head diminished to just a nice ring around the top of the glass and thin layer over beer and it is leaving some nice lacing.

This beer has me very confused I’ve never had an IPA like this before. I went to the http://www.parenfaire.com/ website to look it up. The only thing on the website is that it’s a West Coast Style IPA. Well at this point that doesn’t mean much to me. I guess that’s the typical American IPA. I have a lot of homework to do on hops and IPA’s in general.

Well the second turned into the third so I must be enjoying this IPA. This is one hoppy beer; there is no doubt about that. It does however have a malt character also. Not bad for an American IPA, bitter for sure but some malt flavors in the background. This is opposite of the beers that I normally like. I normally like a more malty beer with a slight hoppy finish. This is hops all the way with just a little bit of malt on the end.

Not bad overall, better then most American IPA’s. If you are at the PA RenFaire and like a hoppy brew stop by the Swashbuckler Brew Pup for the Plankwalker’s IPA - West Coast Style India Pale Ale. Take if from someone that doesn’t care much for IPA’s; this is pretty good, better then most. I have brush up on my hops and IPA’s to effectively rate a beer like this.
Posted by John at 9/25/2009 11:05:00 PM