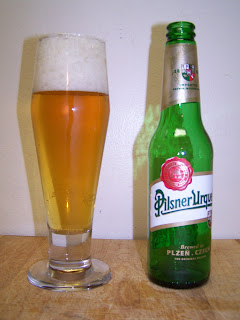 Commercial Description:
It is called the "model of meter" among beers. All other pilsners are a better or worse attempt to copy the original - the first ever Pilsner Urquell. Its unparalleled exceptionality is guaranteed by the same recipe dating from 1842. 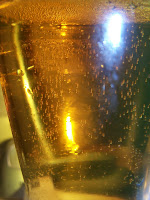 The first thing you notice is that this is a very effervescent highly carbonated beer. There are a tremendous amount of little bubbles rising up from the bottom of the glass. The soapy white head quickly diminishes.

Not much on the nose. There is the classic pilsner malt aroma, somewhat sweet but also grainy or cereal like and that mild traditional hop aroma of the noble Saaz hops. There is nothing special, nothing outrageous it just smells like a good old fashion beer, very clean fresh aromas.


Even before you get to drink this beer the head has depleted to just a small ring around the edge of the glass.

Oh what a nice pleasant experience in the taste and mouth feel of this beer. It’s a cool crisp clean experience; the high carbonation seems to cleanse your palette as the effervescence tingles over the tongue. There is that classic hop bitterness in the finish but it’s just enough to give you a dry finish not a lingering bitterness. This beer has a snappy crispness that you just don’t find in American pilsners anymore.

It’s strange to say but it is almost nostalgic to drink a beer like this again. It’s like going home after a long trip. This is how a pilsner is suppose to taste and did taste back in the day; nothing fancy, nothing special just a good clean crisp beer. I don’t want to get into what happened to the American beers but it’s a crying shame to know that this style pilsner is what they started from. Sorry to babble so but it’s nice to step back out from the over the top craft beers and enjoy a good simple beer just for the beer of it. Sometimes all you need or want is a good simple beer and this is it.

It is remarkable that this pilsner has kept most of its character even after warming in the glass. After all this babbling the beer I’m drinking is now at 65 degrees and it is still drinkable. Now it’s not as refreshing as it was chilled but try drinking an American macro pilsner lager at 65 degrees, Not Happening.

I highly recommend this beer to anyone that is looking for a good old fashion beer. This is now my pilsner gold standard. This beer is an A+ in my book. All pilsners that I taste from now on will be compared to this one. If you don’t like this beer you don’t like pilsners, it’s that simple. 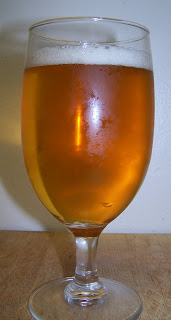 I have been experimenting pouring this beer into 2 different glasses and with different vigor. I used a standard pilsner glass and a round bottom glass, more of a water goblet. I found that if poured aggressively in a standard pilsner glass to create a good head the beer does not have the same crispness as it does in the goblet. It’s not really flat but by comparison it is not as refreshing. I remember in my youth the adults in my family would pour their beers into small 6oz or so glasses. I remember them commenting that this gave the beer a crisper taste. Knowing now that these were pilsner lagers I see what they meant. I don’t recommend the small class but a more gingerly pour will give you the same crisp effect.

With a few exceptions the round bottom goblet is by far my favorite beer glass. Maybe I’ll pursue glassware in another posting. I’m still not sure what I’m doing with this blog.