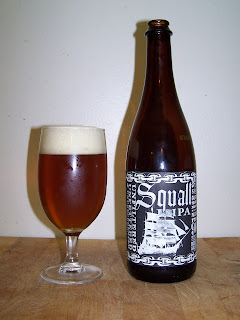 No special significance, just the first beer I opened since starting this blog. 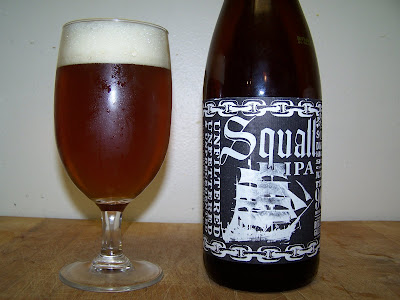 Commercial Description:
An unfiltered, 100% bottle-conditioned, super-pungent imperial I.P.A. clocking in at 9% ABV and dry-hopped with Palisade, Amarillo, Simcoe, Cascade, CTZ, and Willamette hops. The beer will come out in June of 2009 in a handful of eastern seaboard states. It will only be packaged in 750ml champagne bottles. Seek it out... and hoard it from the non-believers.
(RateBeer.com)

General Pricing:
750ml Bottle, $6.00 to $8.00
Review:
Aromas of rich malts and hops hit you up front from the bottle. The rich head suppresses these aromas when poured into the glass but they are ever present. This beer pours a very clean dark amber color with copper hues and a rich off white head. Not your typical IPA this one is going to have some character.

The first impression of the taste is WOW. Very nice rich malt flavors up front with a very nicely balanced hop finish. Neither one is dominant of the other which makes this a perfectly balanced beer. Balanced, yes but this is no lightweight; this is a big beer. The alcohol is present by the warming finish but not up front in your face. This is a very impressive Imperial IPA.

The head never completely diminishes as it keeps a nice protective layer over the top of the beer throughout the whole glass with very impressive lacing.

This is a very smooth and warming imperial IPA that is excellently balanced.

The never diminishing head adds a creaminess to the mouth feel with every sip.

As the beer warms up there is a different bitterness in the finish. It by no means is offensive, perhaps the hops are keeping their presence longer then the malts are. It almost resembles the taste of a barley wine. As I finish this beer I’m wondering if it’s not the alcohol presence that is finally making its self known. I would have to rule out the oxygen factor since this beer kept a protective head till the end of the glass. At any rate, as this beer warms up there is a change in bitterness. I guess I’ll have to leave it at that.

Make no mistake, this is a big beer. I can definitely feel the alcohol after consuming the whole bomber. I have been drinking lighter summer beers for a while so I’m not sure what to compare this too. It is definitely more intense than the Dogfish Head 90 minute IPA or Stoudts Double IPA; both of which I enjoy. It may need to be cellared for a while. I think I’m going to buy one and have it around Thanksgiving or Christmas. At 9% ABV it could go for quite a while in the cellar. Perhaps we’ll see if the warm bitterness it still there then.